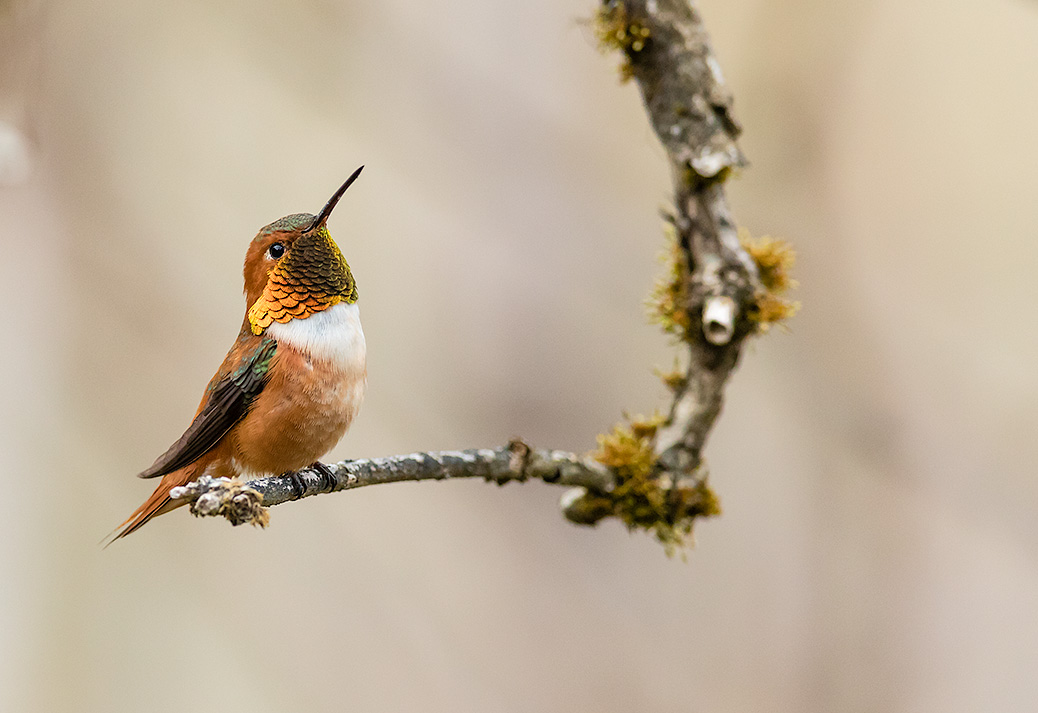 Are you old enough to remember the days when the only way to focus a lens was manually (prior to the early 80s)? Can you imagine tracking a bird in flight with manual focus while simultaneously striving for a proper exposure and good composition using film? Long-time professional wildlife photographers will tell you it was challenging and the keeper rate was low. Long before the digital photography revolution, one of the first leaps in camera technology involved autofocus (AF). Today there are sophisticated autofocus systems with multiple AF sensors (not the same as AF points), up to hundreds of AF points, phase and contrast detection, continuous and predictive AF for moving subjects, and even Sony’s Eye AF for locking on eyes. We have come to rely on AF and expect it to be perfect every time. However, most of us can relate to wildlife photos that looked great in the field on the camera LCD only to find them soft and not quite in focus on the computer screen at home.

What causes poorly focused photos? Set aside the random ones that are usually attributable to poor technique. However, for those photos where the focus of a lens is consistently off the root cause may be in the manufacturing process. Every component in a camera or lens has a manufacturing tolerance, or deviation from specifications. Those specifications can be a length, lens curvature, glass purity, response time, etc. In a perfect world all those tolerances would be zero. But tolerances are not zero. If we are lucky, when all manufacturing tolerances are taken into account in an assembled camera they will cancel each other out. Sometimes, however, they will reinforce each other in one direction or the other to produce an inaccurate result. Inaccurate autofocus falls into two categories: back-focus and front-focus. In back-focus photos the plane of focus is behind the selected AF focus point. Conversely, focus in front of the focus point is called front-focus. Several years ago camera manufacturers introduced AF micro-adjustment for photographers to correct for back- and front-focus problems. At first this capability was available only in flagship cameras. Now some prosumer and consumer cameras have AF micro-adjustment.

AF micro-adjustment allows the photographer to move the focusing plane forward for back-focus or back for front-focus. Techniques range from basic (fast and simple) to advanced (time consuming and more thorough). Most adjustments are done on the camera body’s AF system. At the most basic, a series of photos of a bullseye-like target are taken at several back-focus and front-focus settings and reviewed on a computer screen for sharpness. The optimum AF micro-adjustment is the one with the sharpest result. However, this is subjective and can be prone to error. Nikon’s newest cameras have an automated adjustment called AF Fine-Tune. It uses contrast-detect AF in live view (focusing on the image sensor) to calibrate the phase-detect AF system. Adjustments to the lens itself are possible with certain Sigma Photo lenses using their Sigma USB Dock. This still requires the user to decide what the properly focused setting should be. At the advanced end of techniques is the LensAlign Focus Calibration System (lensalign.com).

The LensAlign hardware consists of a specially designed focusing target and ruler. Setup requires the camera and target are perfectly aligned. A patented sighting system facilitates alignment. Furthermore, the camera and target must be a predetermined distance from each other depending on the focal length of the lens. The longer the focal length, the farther apart the camera and target need to be. Two rounds of photos are taken. In Round 1, five photos at increments of five from -20 (back-focus) to +20 (front-focus) are taken by focusing on the target. The zero point on the ruler to the right of the focusing target is in the same plane as the target. Using the LensAlign FocusTune software, each photo is evaluated for sharpness and the data is regressed to produce a graph of the AF adjustment and the deviation of focus from the focusing plane. Where the line crosses the Y-axis represents perfect focus. In Round 2, the range of AF adjustment is narrowed to more accurately determine the optimum AF adjustment for the lens. For example, in the plot below the optimum AF adjustment is 2 or 3. 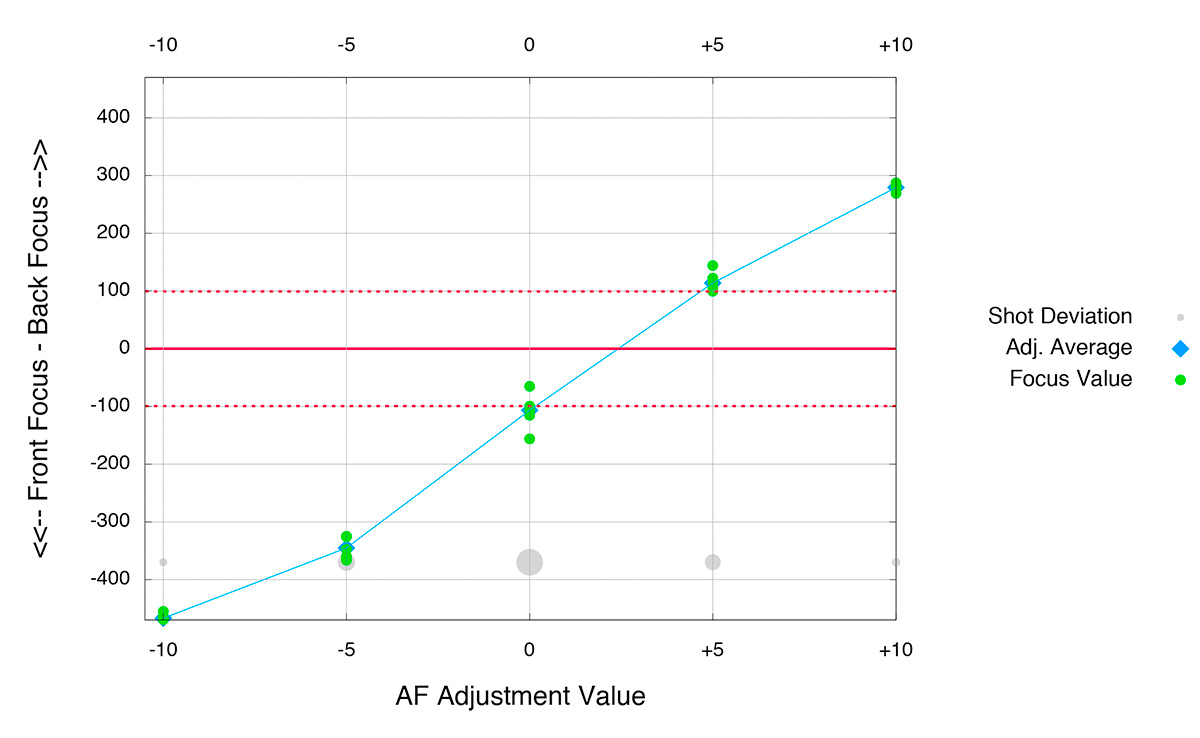 The whole procedure is time consuming, however, it is an objective, rigorous way to properly calibrate AF systems. The optimum adjustment is then saved in the camera firmware. Because this value is specific to the particular camera body/lens combination, the procedure must be repeated for the same lens on another camera body. For zoom lenses the calibration procedure is done at the extremes of the zoom range. Canon allows both optimum adjustments to be used. Presumably for focal lengths in between the extremes some interpolation is done in-camera. For camera manufacturers that allow only one AF adjustment to be recorded, an average of the two extremes is probably best used.

I have calibrated nearly every camera body/lens combination using LensAlign. Nearly is the operative word because I primarily shoot landscapes with the camera mounted on a tripod and manually focus using live view with a loupe. So, some specialty wide angle lenses of mine, like those for astrophotography, remain uncalibrated. However, for wildlife photography, all my medium to long telephotos are calibrated. The photo of the hummingbird was taken with a 600 mm f/4 lens at f/5.6. Hummingbirds are difficult subjects to photograph because they are constantly moving. When they do rest on a limb it is not for long. Depth of field with an extreme telephoto lens is shallow. Combined with a small subject, like the hummingbird, the margin for autofocus error is very slim. Having a properly AF calibrated lens was critical to getting this shot, and for that my time was well spent in preparation.

This site uses Akismet to reduce spam. Learn how your comment data is processed.

Ray Bulson is a freelance nature photographer based in Eagle River, Alaska.  He specializes in fine art landscapes, teaches several workshops, and provides customized personal instruction.  His stock photography is represented by Alamy and Panoramic Images.  He is past president of the Alaska Society of Outdoor and Nature Photographers.